Wow, long time without a blog. I can bet you’re already going to wisecrack about the title being about my kids growing up in the time it took me to write this one.

Many of you know that I own a small business that shoots a lot of youth sports. My predecessor built a set of clients in the figure skating arena that we have strengthened, hopefully, and have enjoyed immensely. We set up a booth including viewing stations where people can view images captured only minutes previous to their visit. Sometimes we print on site, sometimes not if the event is smaller. The image above was taken at the Winter Festival on Ice at the Reczone in Raleigh this past December. 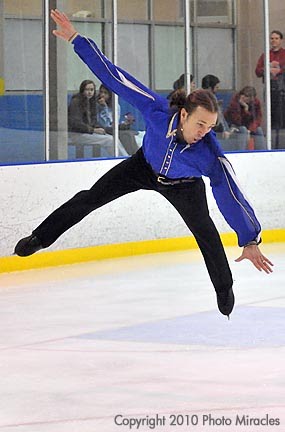 This past weekend, we covered the 2010 Eastern Adult Sectionals. The winners in this competition go on to compete at the national level. In fact, Amy Entwistle who is one of our contacts with this club, won at nationals last year. (Congrats Amy!) We also cover the Central Carolina Skating Classic each spring, hosted by the Central Carolina Skating Club based at the Triangle Sportsplex in Hillsborough, NC.

Attendance at figure skating events have dwindled a bit over the past couple of seasons, due in part to the struggling economy. It also seems to be a bit cyclical, running in parallel to the Winter Olympic four year rotation. With the Olympics currently in Vancouver, we thought interest might be up. Attendance was about the same as last year, but we sold more photos, so maybe interest was up, but the increased interest was from the same basic group of folks. A funny note, the television sets at the rink were set to NASCAR during part of the competition…so you know you’re in the south. 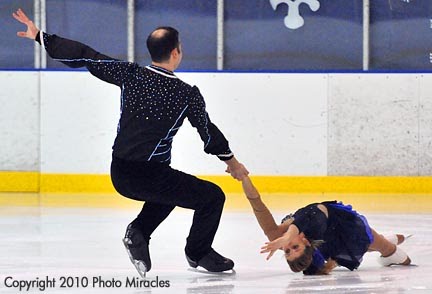 No offense to the skaters, but I’d rather be shooting hockey. That probably is due in part to my personal interest in the sport. I play ball hockey, and have covered the NHL for a good while in the past. The difference in the two sports is quite marked. Hockey is all about speed, conflicting forces and a score while skating is more about artistry and precision.

That brings me to the reasons I enjoy shooting figure skating. As an artist, seeing the human form used in an artistic fashion, especially in an athletic forum is of obvious interest. Seeing someone pursue this with precision means photo opportunities. Furthermore, one thing that many customers like about my work, is the expressions that I capture. When a skater lands a particular jump, or completes a perfect spin, they often display their emotions openly. Sometimes the emotion can be a surprise to the athlete as well as to the rest of us. With the level of concentration it takes to do some of these moves, it is no wonder I get the expressions that I get. Sometimes the emotion may be something outside the concentration on their routines. At the adult level, there were more dancing competitors than we typically see at other competitions. No doubt these adults spend many, many hours together and they MUST like each other at least a little bit to accomplish the moves we see.

One thing that I try to do at all of the competitions we shoot, is to get closeups of the competitors when possible. The lighting in these rinks is quite horrible, and to make it worse, unevenly horrible. Often, the skater will make their best moves in the darkest spot on the ice. Take that, in addition to the sodium chloride lights cycling through a range of colors sixty times a second, and you get a photo tech’s nightmare. You can see a closeup image here that worked out pretty well. Lucky me. 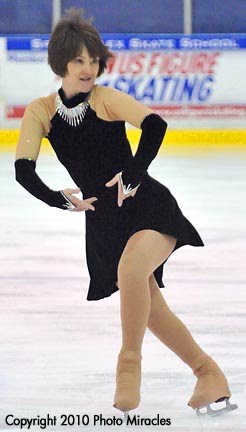 This year at the Sectionals, we were also lucky enough to see one of the long-time coaches that we see at just about all of the competitions we work with. Mary Jo Bullin skated competitively for the first time in thirty years (she must have been about four), to a tune that her father had suggested for her a long time ago. Her father has passed, and she skated the program to honor him. As a coach, you never want to compete in front of your players/students and not perform at a high level, and that was obviously not a concern for Mary Jo. As I told her later, her routine was smoking hot. Her father would have been extremely proud, no doubt. Her students also will never be able to say those who can’t, teach. Mary Jo can.