The Olympics are one of my favorite sports to watch. Unfortunately, they only come around every four years. Every two years if you enjoy both summer and winter versions as I do. The Winter Games just ended, and one of the biggest events this year was the men’s hockey tournament. Here in North Carolina, we are lucky enough to enjoy our very own NHL team, the Hurricanes. Four of our players brought back medals. Two bronze from Finland players Joni Pitkanen and Tuomo Ruutu, a silver from Team USA’s Tim Gleason, and a gold medal won by Hurricane captain Eric Staal. 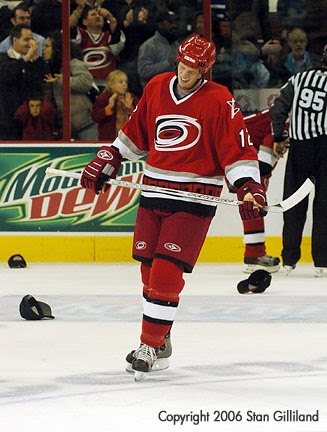 Staal was the Hurricanes’ first round draft pick back in 2003. He’s already played in two All Star Games (named MVP in one), won a Stanley Cup in 2006 and just recently took over as captain after Rod Brind’Amour stepped aside. He’s come a long way mighty fast, and it hasn’t seemed to affect him in public. He comes across as humble in interviews, and only calls attention to himself through his exuberance when he scores.

I have been lucky enough to cover the Hurricanes frequently for the Associated Press, European Pressphoto Agency, and as team photographer for a time. For Game Seven of the Stanley Cup Finals in 2006, the Hockey Hall of Fame hired me to shoot for them. I was on the ice when the Cup was presented and in the locker room as Staal and his teammates took their first drinks from Stanley’s Cup. Quite a night to remember. One of many in, what we hope, will be a long and storied career for the newest gold medalist. 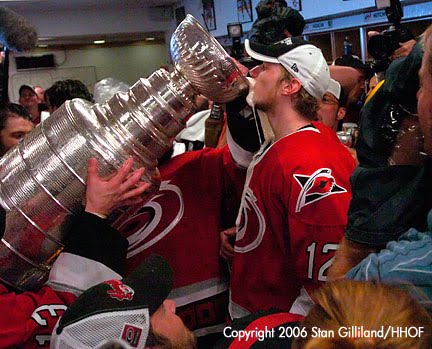