The State Fair of North Carolina is a little different from other states where I’ve lived. Here, if you haven’t gone to the fair at least every couple of years, it seems you are an outsider. Enter my wife, Alice. She hasn’t been to the Fair here since, she thinks, her senior year in high school. (That’s been quite a while.)

Certainly, I remember going to the Fair as a kid here back in the sixties and seventies. Yeah, I’m old too. The excitement of the rides, the crowds in the exhibit halls and all the junk we’d pick up in bags for the after-fair contest with my brother and sister to see who picked up the most stuff. It wasn’t COOL stuff, just stuff. I would venture to say that none of that stuff still exists in my possession or that of my siblings. I was disappointed in the “stuff” handed out at the fair. The “got milk” sticker was the best thing we found, and that’s not saying much.

Then there’s the food. Alice tried some souse (you don’t want to know) and quickly regretted it. I tried a deep fried Reese’s Peanut Butter Cup, and wasn’t totally revolted. The ham biscuit, sausage and onions, funnel cake and cinnamon roll we had were all good fair fare. Hey, it’s only once a year. 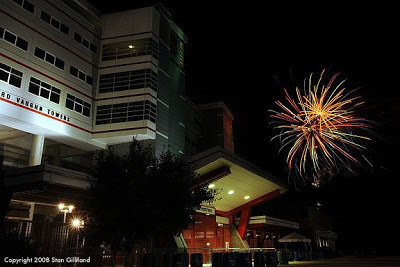 The weather was great for our trip, slight breeze with a temperature in the mid-sixties. We didn’t ride any rides, but I did take the camera and try a few fireworks shots. As you can see, my position wasn’t all that great as I underestimated the distance from the launch to our spot behind Carter-Finley Stadium. Perhaps I’ll go back later this week to try again.