Our friend John Lawrence, who owns Imagine the Possibilities video production company, asked us to shoot his sister Teresa’s wedding to Kevin Carlton last week. His co-owner Travis was unable to get back early enough from a previous engagement to do the shooting, so while we sat around between skaters at this year’s Falling Leaves Figure Skating competition in Richmond, John asked if I was available and willing. I’m so glad I had the date open.

You never know how these things are going to go, especially when you jump in at a late date. The one person that I’ve always been afraid of when shooting a wedding is the bride’s mother. I had no reason to fear her in this case, she was a gem. 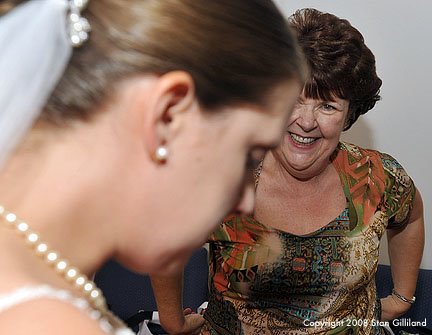 John had provided me with a list of shots he wanted, and other than those group shots, he left me to my own devices. Since I was not familiar with the church, and only knew that they had some pretty clear outlines of where I could NOT go, shooting the ceremony was looking like a good time to rest my heels. Not so, the coordinators from the church were quite helpful and allowed us access to just about anywhere except on the dais…and who in their right mind would want to be up there?

The couple faced the audience during their vows, so not only did I get that, but was able to get their first kiss as well. Having the D3 certainly made all this easier, for even with the light we had it was still a bit dim in there. I love this camera. 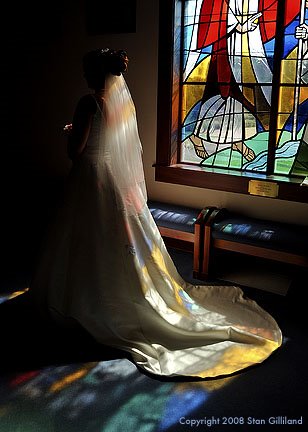 Following the ceremony, they allowed me to ride along in the limo with the bridal party. I only wish I had a wider lens, as the limo was SLAM full, and I couldn’t get everyone in the shot. Sitting next to Mrs. Lawrence, it was tough to get her into the picture with her daughter and new husband. The short drive did give me a chance to converse with Mr. and Mrs. Lawrence, who were both very friendly and excited about the whole thing. You could really see how much the Lawrence family loved each other. This makes for easy work on my part. 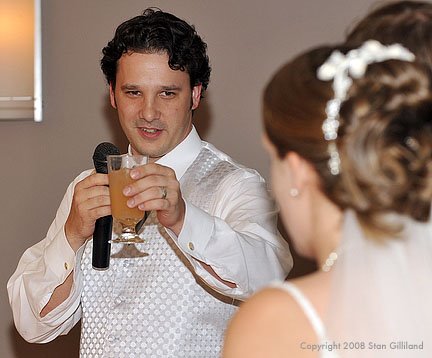 I really like this shot of the toast. The bride and groom apparently chose their attendants very, very well. Bryan Nuckols, the best man, only spoke briefly but clearly touched both Kevin and Teresa as tears were clearly evident. The maid of honor, Christina Tillery, followed suit.

Everywhere I looked Mrs. Lawrence was happily chatting with everyone there, and if they were willing, taking them onto the dance floor. I don’t think the smile left her face all day. Meeting the Lawrences certainly made my week. Here’s hoping the best for the bride and groom, and both their families! 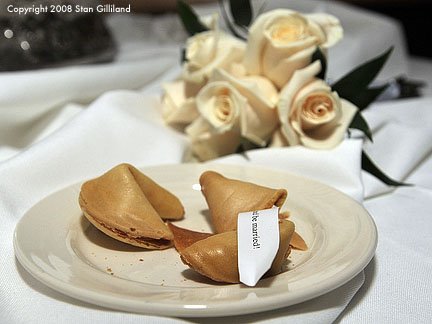