Good thing I have great friends. They can take a little sarcasm and a lot of driving around during their visit. Steve and Sonya flew out from Oklahoma earlier this month just to see us and hang out for a week. Last time they visited, we went up into the mountains for some Fall color. This time we were off to the beach. 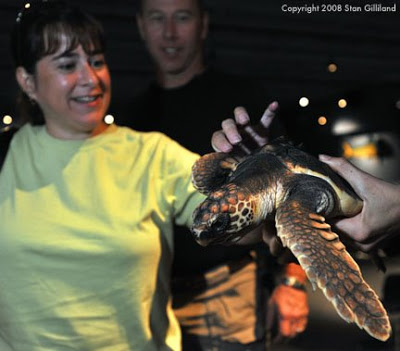 Sonya hasn’t spent much time at the beach, and hasn’t developed a taste for seafood yet. She’ll get there eventually. We were told to avoid any sushi, but she dove right into the Calabash style stuff. She didn’t sample any oysters (Steve and Alice both love the fried oysters.) but she did try a fried clam I think.

We had a condo right on the beach at Pine Knoll Shores, near one of the state’s wonderful aquariums which we visited our first full day there. First up, was a meeting with a year old sea turtle. Sonya said he felt “leathery” but was too cute to keep her hands off of him.

Tried a few quick shots of a jellyfish, which you see here. Also had a bit of luck with an octopus, but I’ll save that for another time. Alice didn’t get to join us (she said she didn’t feel well, but I think she was power napping at the beach).

Steve is the one guy, other than my Dad, who influenced my foray into photography. Dad built a small black and white darkoom for us when I was young, but Steve got me into journalism class and on the yearbook staff which is what got me hooked on the idea that I could do it for a living. Steve is also an unrepentant gadget guy. He owns (and will sell you one) these incredibly bright LED flashlights like the special ops guys might carry.

So one night Steve and I went Ghost Crab hunting with his flashlight and my D3 camera. There were hundreds of these little guys on the beach, and they seemed to freeze up whenever spotlighted by Steve’s LED mega-flashlight. Have no fear, no crabs were harmed in the process.

We ate lots of good southern cooking, good fresh seafood and for that reason, have visions of hours in the gym working off the extra weight. Worth every minute.Since you are probably still waiting for the punchline, here it is. Steve gave us his best Popeye impersonation while posing in the “crab suit” at the aquarium. Suits him well, don’t you think? 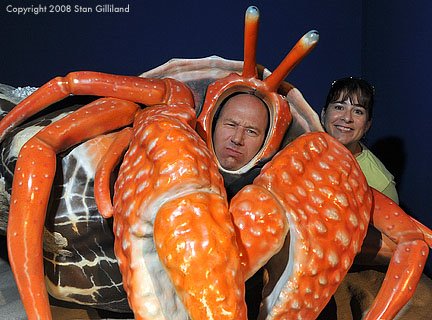 In all seriousness, it’s great to have friends who not only fly cross country to see us, but also are so open to new adventures, even the small ones.