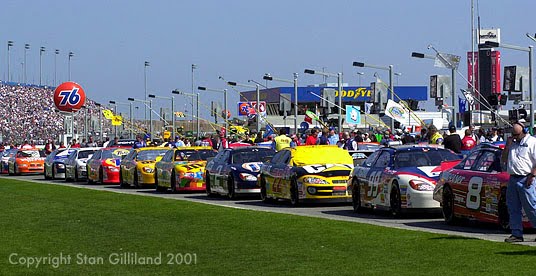 One of the biggest events I’ve been fortunate enough to cover was the Daytona 500 in 2001. Writer Paul Ensslin and I set out from Nando Media to cover the big race after launching a new website we created specifically to cover NASCAR, not knowing the incredible drama we would witness after the race had ended.

We had both covered races in North Carolina previous to this trip (That’s Rockingham from the previous year, above). In fact, it’s tough to get a credential at Daytona if you haven’t. We arrived, got our credentials and drove under the track to the infield where we had the chance to walk around as fans the day previous to practice. We signed our names on the finish line, and Paul even kissed the pavement. He’s a big fan. I like shooting NASCAR, but I’m not kissing anyone’s asphalt. Paul’s son is a big Tony Stewart fan, so we made sure to get a photo of Paul with Smoke’s car. We also stopped by the tent with a Dale Earnhardt car, because that’s just what you did back then. Everyone seemed to be a fan of the number three car…well, except those OTHER fans. 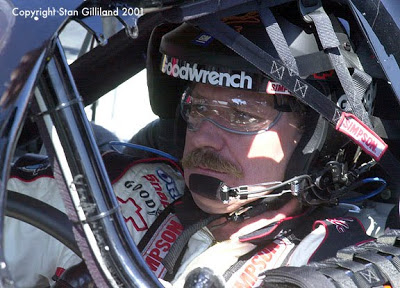 As the drivers walked out to their cars, photographers had their last chance to get a shot close to the drivers, and I was very fortunate to find myself just opposite Dale Earnhardt as they were calling us off the track. I was the last to leave the side of his car, and took this shot just before I jumped back off of pit road.

Shooting a race all alone can be quite daunting. At Daytona, the track is so huge, it is impossible to cover it well all by your lonesome. My theory was, start at turn one, spend some time on that back straight way, hit turns three and four and then focus on pit road leading up to the finish. Sounds logical, right? Of course, I was on the lookout all day for other stuff going on like fans in the infield or the officials in the 76 ball turret on turn two. 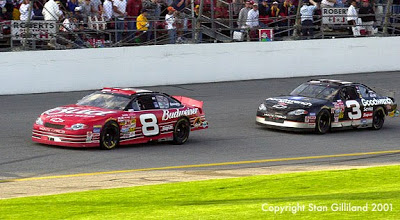 For the latter part of the race, Dale Earnhardt had been blocking for his son Dale, Jr. and teammate Michael Waltrip who were in the lead. Junior had yet to do all that well on his own, as had been hoped, and it was certainly a “feel good story” to have his dad protecting him from the field.

For those of you who know NASCAR, you know what’s coming. With only a few laps to go, I was at turn four. There were only a handful of guys there right in the corner. It had taken longer than I expected to get there, and I hesitated to move too quickly to the pit area without shooting what I wanted in turn four. My friend Bill had loaned me his PRN Radio headsets to listen to the radio traffic during the race. I listened as they told about an accident sending Tony Stewart airborne over other cars, causing a twenty car pileup. Logically, with so many cars needing repairs, I figured that action would provide me with images I ought to have. So I bolted for pit road. This would be close to a half mile sprint, with all my gear on my back.

So when I arrived at pit road only to hear of another accident on the very last lap, I was disappointed to say the least. I shot the finish, Waltrip and then Junior. It was then I heard Dale, Jr.’s voice on the radio say “how bad is he?” Looking up towards turn four, I could see the smoke. Turned out, there was some bumping and Dale, Sr. had hit the wall right there in the corner of turn four. I had been just yards from where it happened just minutes before. The photos published of the crash were taken by the guy about ten or twelve feet from me before I bolted for pit road. Ugh. 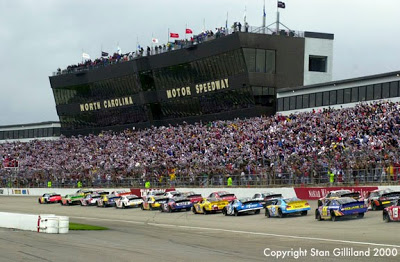 Some would say “why would you want to be there when someone dies?” or “why would you want to see someone get hurt?” The answer is, I don’t. Nobody wants to see any of that. However, as a photojournalist, your job is to get that shot. Your job is to show people what happened. As a photojournalist, if you could only get one image that day, the image you wanted was the number three car hitting that wall.