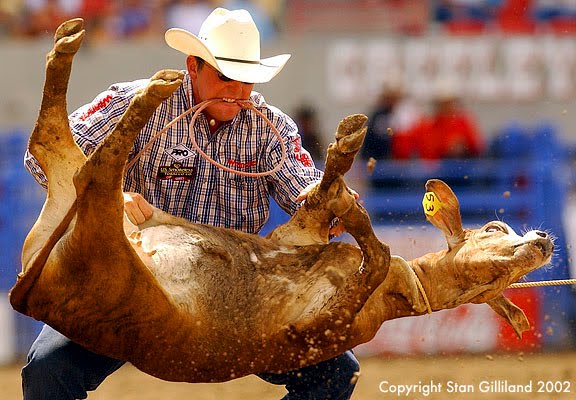 Back in 2002 I was lucky enough to have an opportunity to attend Rich Clarkson’s Sports Photography Workshop in Colorado. Rich Clarkson is a very well known photographer, who had shot every NCAA basketball championship since dirt. If you’ve seen a photo from one of those championship games, chances are excellent that you’ve seen his work. Several other well known shooters mentor those attending. Mark and Joey Terrill, John McDonough, Bob Rosato and Dave Black. Mark is an Associated Press staffer out in Los Angeles, while brother Joey is a freelancer also living in California. McDonough and Rosato shoot for Sports Illustrated. Dave Black is well known for his Olympics work especially in gymnastics and figure skating, but is also known for his “light painting” work (he’s also a bit of a cowboy). 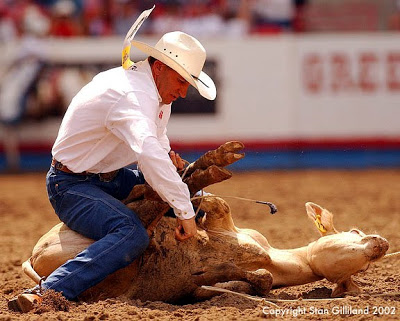 I had some very nice things said about my work by these photographers, and some things I should work on in the future obviously. I hope I have made good use of these pointers, and would welcome the chance to have that theory tested some day with another review.

Among the opportunities afforded us at the workshop, besides these portfolio reviews, was to work alongside these guys in their element. Dave Black shoots a lot of skating, so I had hoped to shoot a figure skating exhibition with him, but failed to sign up in time. I did get to shoot swimming at the U.S. Olympic Training Center where he taught us about using strobes. I also got to work shooting a couple of quick environmental portraits using only speedlights (flashes) with Joey Terrill, known for his lighting skills. 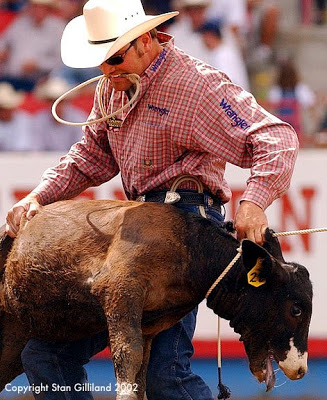 Packing so much gear for the flight out to Colorado, I didn’t have room for my cowboy hat or boots. If you have ever been to a rodeo, you may have noticed that everyone associated with the rodeo dresses the part of a cowboy. Even the photographers make some attempt at fitting in, if they want to do it right. I was unaware of this, and showed up in shorts and a big ol’ floppy canvas hat. Nice. After strolling around trying to find interesting shots of competitors getting ready, stock shots and detail stuff, I set up next to (if not behind) a fence post up against the grandstand.

Turns out, luck was with me. I had obtained a credential prior to the trip out through work. The folks from the workshop that showed up, were corralled in an area like a box seat on the front row, sort of raised up a bit from the arena floor. I got an interesting angle on some of the events, and a much better angle on the calf roping. That is what lead to the shot up top, a favorite of many in my family. You may have noted the calf’s expression in all three of these is somewhat interesting.

In fact, after several other attendees presented their best rodeo shots to the workshop each morning, where all the professionals critiqued our best three shots of the day, mine got the best reaction. “Now THAT’s a rodeo shot!” was the one I remember best, for obvious reasons. Not sure who it was that said it though. I do know that they liked the expression on both the cowboy AND the calf, the sharp focus, and the moment captured. This was a highlight of my photo career. That may sound silly, but think about it. Hearing your peers, especially those with that amount of expertise, say that your work stands out…that’s strong stuff.